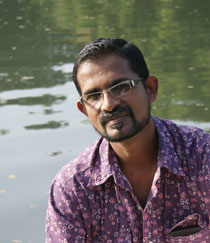 Born in 1971 at a village near Travancore, Suresh Kumar Muthukulam has been painting since his childhood. For his formal training, he studied at the Modern Fine Arts School at Mavelikara to receive a diploma in Painting, and then received a degree in the Kerala mural painting tradition from the Institute at Guruvayoor Devaswom, under the apprenticeship of the great master Mammiyoor Krishnakutty Nair. Earlier a visiting lecturer at the Raja Ravi Varma College of Fine Arts in Mavelikara, he now works as the Chief Mural Artist at Vasthuvidya Gurukulam at Aranmula, a unit of the Kerala Cultural Department, while also continuing with his own practice as an artist. The extensive travels that his job involves, visiting temples and palaces throughout Kerala, has given him an opportunity to study the older mural painting techniques and imagery of the state, which has inspired and impacted his own compositions on canvas. Suresh uses natural colours with the wash technique. Replete with detailed ornamental flora and fauna as backdrops, his animated figures embody a village life infused with the portrayal of deities and mythology. Reflective of narrative tapestries, the gifted muralist and artist draws his visions from ancient religious texts. The artist’s work has been exhibited in several shows. The Last Supper, painted by him in traditional Kerala mural style was gifted to the Vatican Museum by the Kerala Government and his work on Mahatma Gandhi’s Salt March is part of the Gandhi Museum Collection in New Delhi. Besides these notable examples, his work can also be found in temples and hotel lobbies in twelve different countries. Suresh lives and works in Kerala. 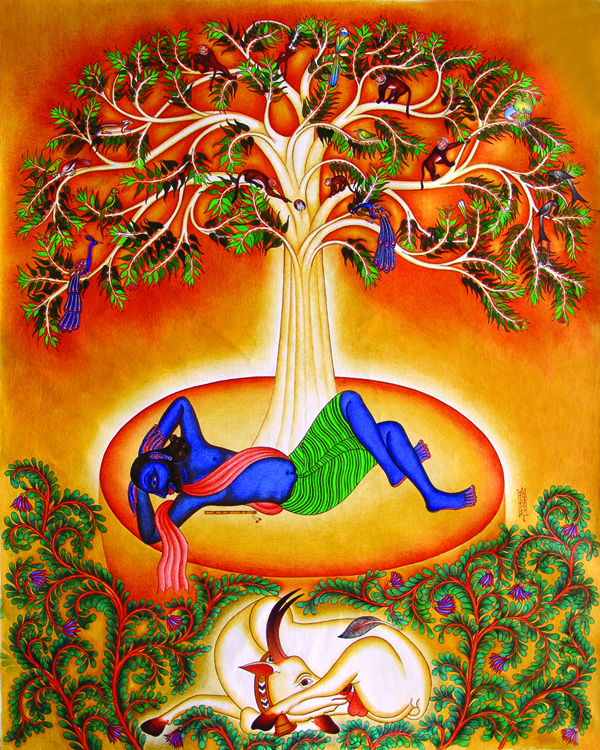