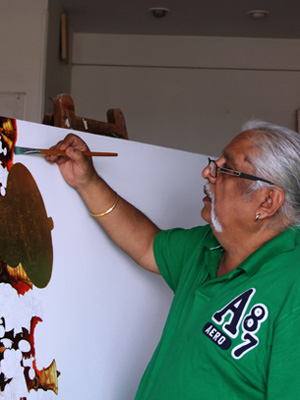 Born in 1950 in the temple town of Nathdwara in Rajasthan, Charan Sharma completed his Master’s Degree in Art, specializing in Drawing and Painting, from the University of Udaipur. He later studied graphics at Sir JJ School of Art in Mumbai, and obtained a postgraduate diploma. A fascination with the architecture and grandeur of ancient palaces of Rajasthan marked most of his earlier work, which focused on depicting the interiors and exteriors of such buildings. The content and style of his later series however are marked with a decisive change. Historic ruins and heaps of pebbles have been replaced by a meditative ethos. His current imagery explores spiritual themes. Iconic figuration of Krishna, Buddha and other deities, drawn and painted with intricate details in a rich palette add to the luster of his compositions. Following a maiden show in Rajasthan in 1972, Charan’s work has been exhibited in numerous solo and group shows at Mumbai, Delhi, Singapore, Vienna and Budapest besides other cities and at biennales and triennials. Honours to his credit include prizes at the Painting of the Year competition in Singapore, Rajasthan Lalit Kala Academy, and the Maharana Mewar Foundation Awards. He has also designed, illustrated and shot photographs for several books, including the biographical work on J Krishnamurthy. Charan also directed Astha ke Ascharya, a film on Nathdwara. He lives in Mumbai and works from his studio in the city. 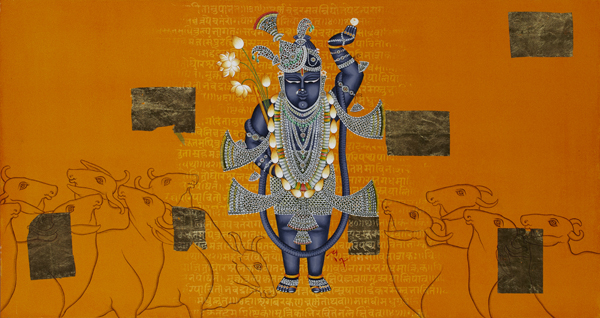