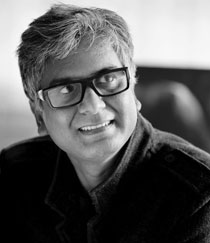 Sudip Roy, born in 1960 in West Bengal, graduated from the Government College of Art & Craft in Kolkata, later shifting his base to Delhi. In a realistic genre, his art revolves around themes inspired by everyday life. People, places and objects that he comes across appear in his work. There are landscapes in watercolours, pencil sketches and charcoals, besides studies of people and architectural facades of historic monuments and temples as well as abstract imagery. In a distinct palette, his styled compositions turn inanimate objects into sensuous and pleasurable visuals. Equally deft in working with oils and watercolours, his work is atmospheric and limpid while the themes also include icons. He is amongst the select few Indian artists to have painted the BMW for the German company. Recipient of several awards including a Gold Medal from the Sahitya Kala Parishad and from AIFACS, his work has been exhibited in solo and group shows in several cities across India as well as abroad. It is also part of important corporate and public collections. The artist lives in Delhi and works from his studio in the city.