Born in 1939 at Ahmedabad, Manu Parekh studied drawing and painting at the Sir JJ School of Art in Bombay. With a career spanning varied experiences, ranging from painting to acting to designing, he initially worked as Art Designer at the Weavers’ Service Center in Bombay and then as Design Consultant for the Handicraft and Handloom Export Corporation of India, that took him on extensive travels throughout India besides Europe, USSR and elsewhere, before he turned to painting fulltime. Manu Parekh’s deft handling of his imagery, texture, palette and the variety of subjects that encompass his creative outpouring are manifest in his amazing Banaras series and still life works. The energy of the organic form and the inherent sexuality within the forms are intangible elements in this prolific artist’s paintings that provoke viewers to take note of the world around with its volatile energy and the attendant emotions of anguish or joy. In his skillful brush strokes, the ghats, the river, the boats, the temples and the surroundings are captured to highlight the culture and mood of the city and its people. Equally remarkable for its play with light and shade, echoing the changing colours and moods, are his works in still life and flower series that present a picture perfect imagery. Recipient of the Padma Shree, National Award of the LKA and the President’s Silver Plaque, among other honours, Manu Parekh has been associated with various Indian art institutions and international projects. He has had several solo and group exhibitions including those held at the NGMA Delhi and the Smithsonian in USA, besides all over India. Two books have recently been brought out on this artist, who has also been the subject of a film. His work is held in many public and private collections in India and abroad. Manu lives and works in Delhi. 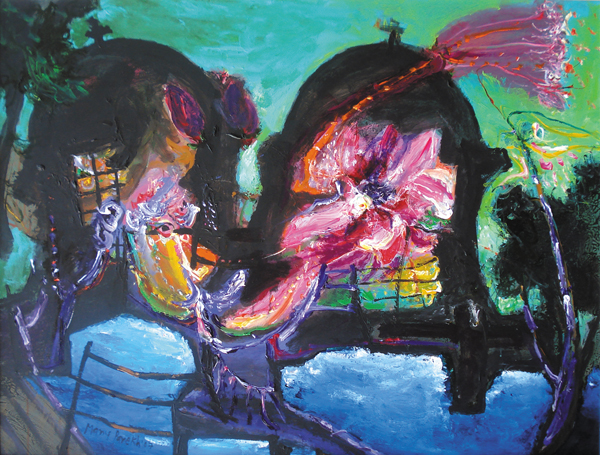