Born in 1974 at Delhi, Puja Bahri graduated in English Literature from Delhi University, followed by a course in Interior Design from the Apeejay Institute. The artist then went on to train in Painting and Sculpture at the Triveni Kala Sangam, Delhi, to take her passion for art forward. With consistent practice and two short courses in Mixed Media and Abstraction at Central Saint Martins in London, the artist has worked to refine her form and technique. Her repertoire includes paintings, photography, digital, video art, and sculpture; in a semi-realistic style combining abstraction with figuration. Working in series and a mix and match of media and forms, her art comes across as both visually and intellectually stimulating. Her earlier imagery featured semi-clad or nude couples in different posturing and self-content, surrounded by nature often accompanied by musical instruments, and embellished with masks and crowns. Her current work though, focuses on her encounters during exploratory photographic voyages and juxtaposes the urban with rural milieu to create an engaging tapestry of images and ideas. Contemporary Indian cityscapes, where the old and the new, the poor and the rich co-exist, appear in her surrealist imagery, overlaid with graphic markings. The thrust of her creativity has clearly traversed from a painterly stance to a layered conceptual and digital media genre in this series, while the imagery rotates around the changing Indian metro-scapes and the daily struggles of its inhabitants. The artist has received several accolades for her works, including a First Prize in the video category at the VIII Biennale Internazionale Dell’Arte Contemporanea Di Firenze in Florence, Italy in 2011. Featured at the Delhi International Arts Festival 2011 and 4th India Art Fair 2012, her work has been part of exhibits held at Delhi, Mumbai, Pune, Bangalore, Hyderabad, Hong Kong, Dubai, Singapore, Florence, Malaysia, South Africa, Dhaka, and New York, from where it has been picked up by discerning collectors. Puja also works in the arts for community domain and is one of the two founders of a not-for-profit organization, Arts 4 All Trust. She lives in Delhi and works from her studio in the city. 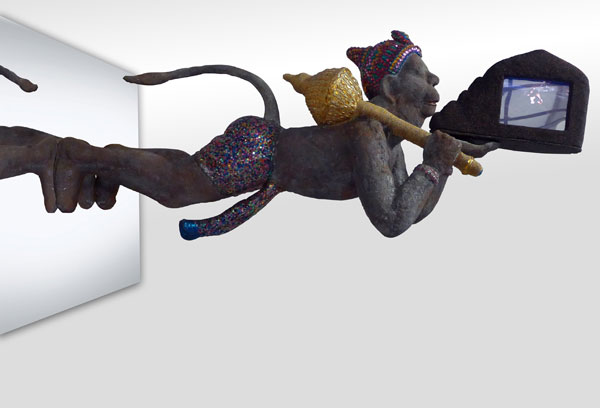