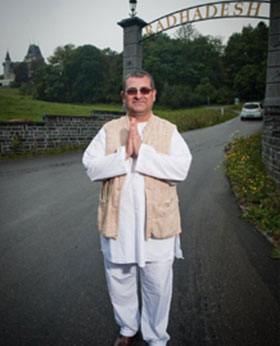 Director of the Museum of Sacred Art MOSA in Belgium and at Vila Vrindavan in Florence, and President of the Jose Gurvich Foundation and Museum at Montevideo in Uruguay; Martin Gurvich Mahaprabhu dasa is credited with supporting several artistic and socio-cultural projects. The only son of renowned artist José Gurvich (1927-1974), who left Lithuania in 1932 to settle in Uruguay, but died young leaving behind an impressive art repertoire, Martin’s passion for art seems natural. After finishing his studies in Political Science from Syracuse University, USA,he joined the Hare Krishna movement (ISKCON) in Paris and travelled through India, before settling in Belgium.

Impressed with the dedication and quality of spiritual art of India, he has committed his personal resources to build the Museum of Sacred Art, and facilitate exposure of Indian art in the West. Besides Living Traditions in Indian Art published in three different European languages, he has also brought out other books/catalogues that document the work of Indian artists.
Currently ISKON’s Communications Director for Belgium and Europe,Martin Gurvich also represents the Hindu Forum of Belgium and Europe including ENORB. As a member of the European board of United Religions Initiative URI (a global interfaith organization), he continues to espouse religious diversity, political neutrality, social cohesion and humane values. Martin lives with his wife and daughter in a community of devotees at Radhadesh near Brussels.