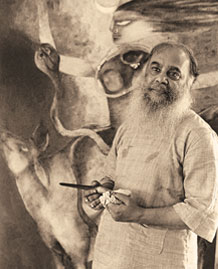 Born in 1947 at Kolkata, Shuvaprasanna, full name Shuvaprasanna Bhattacharya, who is fondly addressed as Shuva, studied Art at the Indian College of Arts & Draftsmanship in the city. His checkered career, spanning nearly five decades, includes a varied range of work as a graphic artist, painter, educator, writer and art activist. Both as an artist and a man, Shuvaprasanna is from and of Kolkata and the urban milieu of the city has figured prominently in much of his work – its sickness and survival instinct, its violence and vulnerability, its joys and people. Evoking irony as well as empathy, his work comes in an assortment of media – oil on canvas, drawings on paper, charcoal, and mixed media while he has also experimented with sculptural forms and installations. Shuvaprasanna often works in series and his themes range everywhere from cityscapes to clocks to crows and owls. His repertoire also includes passionflowers with their discrete erotic undertones and a divinity series that includes paintings of Radha and Krishna. The icons appear in vibrant hues that include a textural use of gold and silver foil, reminiscent of Indian miniature painting. Winner of numerous awards, he has also written on matters of art and issues of social concern and his work has been documented in the book Black, Brown & The Blue, published by Roli Books. Founder and promoter of the Arts Acre Foundation, exhibitions to his credit include those held in various Indian cities as well as internationally in Germany, Switzerland and the US. Having represented India at the Biennales of Havana and Ankara as well as at Triennial India, Shuva lives in Kolkata and works from his studio in the city.