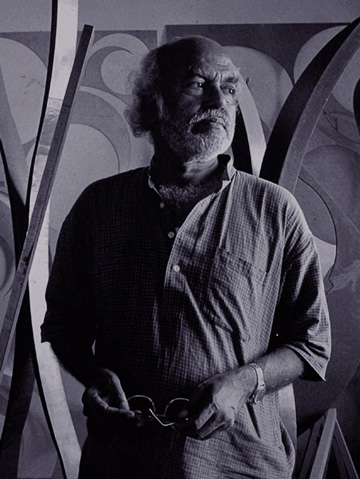 Born in 1937 at Kannapuram, Kerala, Balan Nambiar is a painter, sculptor, enamellist, photographer and research scholar. He received his Diploma in Fine Arts in Sculpture from Government College of Arts and Crafts in Chennai. Working and molding metal, primarily stain­less steel, into abstract forms, he creates vis­ually powerful sculptures. Rooted in rural India and resonating with rituals and performance arts of the South, a domain of his ongoing research, his Mirror Idol series is inspired by kannati-bimbam, an auspicious object used in Kerala rituals, which for practitioners of Kalaripayattu and Theyyam symbolizes mo­th­­­­­­er goddess Bhagavati. Marked for their technical precision and based on geometric principles, his sculptures resonate with philosophical and religious concepts. Innumerable sketches are drawn first. They are then converted into computer-generated designs, which are molded into desired forms in a laser-machining factory. The cut pieces are finally cleaned and welded and assembled by the artists in his studio, taking help as required from structural engineers and welders. The former Chairman of the Lalit Kala Academy, Balan Nambiar has also published research papers on rituals of Kerala. Adept at painting and enamel work besides photography, he has also done several large outdoor metal sculptures including some that adorn Indian Oil building in Delhi. Winner of National and State awards amongst others, his work has been exhibited in different Indian metros and at Stuttgart and other cities in Germany, at Venice and other centers in Italy. A member of various advisory committees, his work is held in significant public collections including at the Electronic City, and Jawaharlal Nehru Centre in Bangalore, at Texas Instruments in USA and at Buddha Jayanti Park and National Gallery of Modern Art in New Delhi. The artist lives in Bangalore and works from his studio in the city. 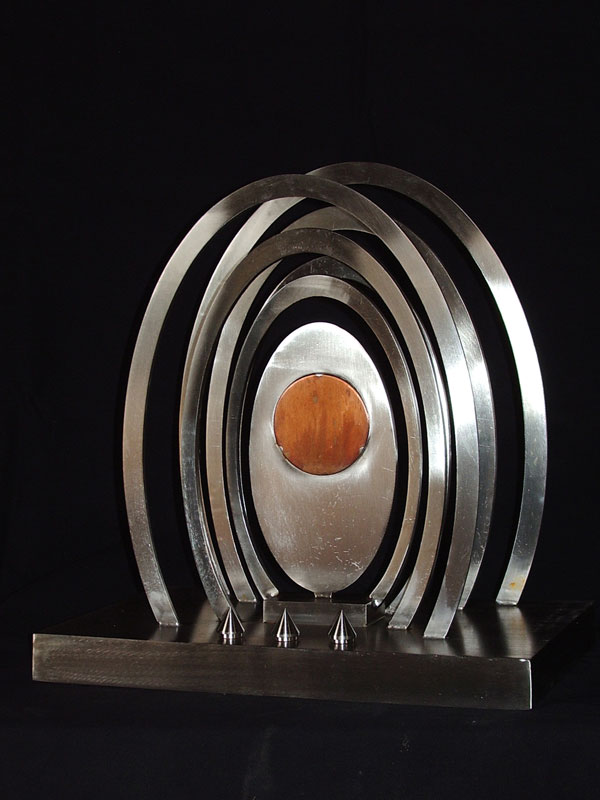