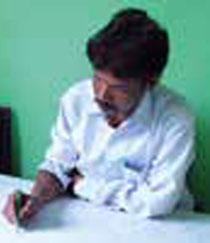 Born in 1968 at T Narasipura in District Mysore, K S Shreehari specializes in the pure Mysore style of painting. With a family history in art that goes back four generations, the painter is renowned for his designs and traditional gesso style paintings. A graduate of the University of Mysore, he works on a range of subjects – the traditional as well as somewhat unusual ones. Beautifully composed and painted in bold colours, his work encompasses Raja Rajeshwari, Sri Rama-pattabhisheka, Kodandarama, 32 forms of Ganesha paintings as well as jigsaw puzzles like the Panchanaari-Turaga, where the figure of a horse is made up of five female forms and Navanaari-Kunjara where nine female figures form the elephant figure. Virata Vishwaroopa, featuring the entire universe with animate and inanimate objects, is a testimony to his creative imagination and attention to details. Felicitated with awards including the Kamala Devi Chattopadhyaya Vishwakarma Award, Rotary Ramsons Kala Pratishtana Award and Mysore Dasara Art Exhibition Award on four occasions, the artist has participated in various traditional painting workshops. His work has been exhibited in several solo and group exhibitions at Mumbai, Bangalore, Nagpur, Madras and Belgium besides the Festival of India exhibition in the US. The artist lives and works in Mysore. 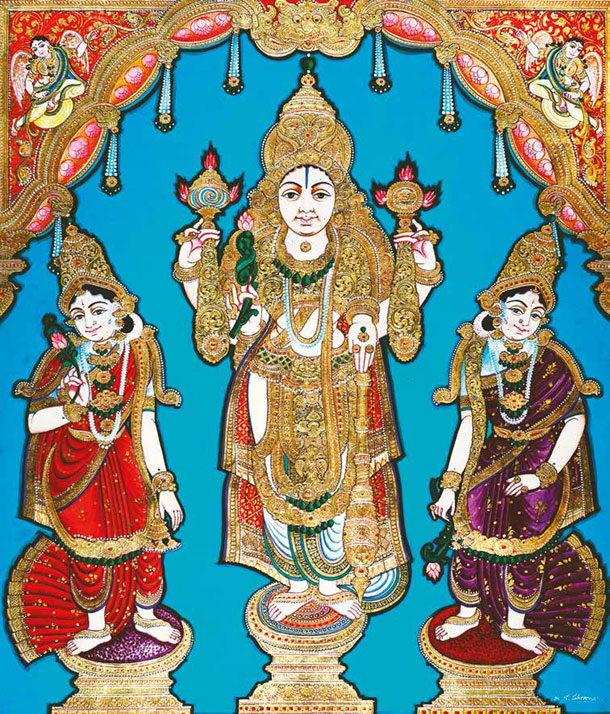