Manish Pushkale, born in 1973 at Bhopal, is a trained geologist who learnt art at an arts college in Bhopal during his close association with Bharat Bhavan in the city. A winner of the Raza Foundation Award, he is also a recipient of an artist’s residency from the French Government. In a subdued palette and with a lingering calm, his imagery appears to form an intrinsic link with mythology sans any overt references. The abstraction comes in subtle brush strokes and shadings with multi-layered meaning in motifs and symbols that come to light on a closer viewing. His minimalist oeuvre makes a foray into spirituality mixed with a vitality and dynamism. The repetitive patterns and sequences appear like musical notations in some works and mantras in the others. There are also some geometric shapes – squares, circles and triangles in mesh like forms and in variable tones and frequencies. Besides paintings, he has also worked on the Silk Route Project during the Smithsonian Festival in Washington and has done a large mural for the Ministry of External Affairs. His work has been exhibited at Bhopal, Delhi, Mumbai, Paris, London, Munich and Melbourne, amongst other metros around the globe and his work can be seen in various well-known collections. An active organizer, Manish writes, functions as the secretary of the Ektara Foundation and is also a member of the Raza Foundation. Manish lives in Delhi and works out of his studio at home. 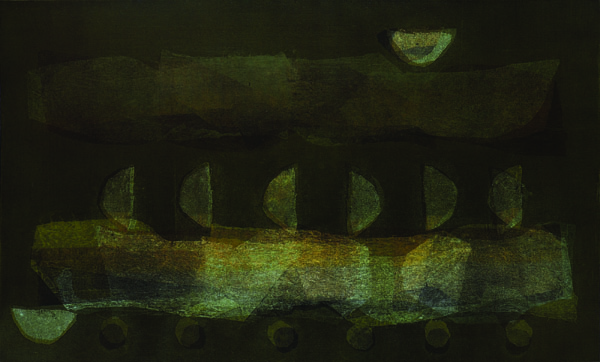