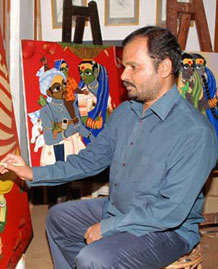 A native of Sandur, in Bellary district, Kashinath Venkatesh Kale studied at the Vijaya Fine Arts College in Gadag and secured a diploma in Painting. Guided by his father VT Kale, a highly respected artist, and drawing inspiration from mythology and the charm of rural life, his work combines brightly coloured and highly stylized subjects drawn in the Vijayanagar and Surpur style. Combining the traditional with modern, his imagery is painted in a flat, bright, gouache palette. Impacted by the shadow puppetry practiced in the region, his skillfully drawn male and female characters appear with voluptuous figures and large round eyes. The compositions integrate different scenes and story sequences to bring out the rustic flavor of the subjects, ranging from festive celebrations to mythology associated with Goddess Chamundeshwari. Kale, who works in oil, watercolour, acrylic, pastels, charcoal and pencil, has participated in several group exhibitions in major Indian cities and also showcased his work in solo exhibitions. 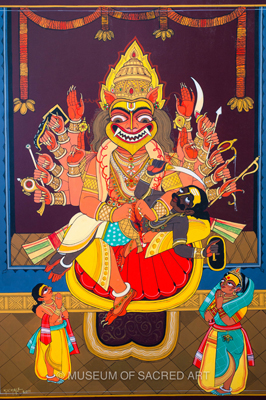