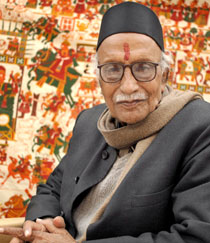 Shrilal Joshi, born in 1931 is a celebrated Indian artist of phad painting, a form of popular folk painting in Rajasthan. His father, Ramchandra Joshi initiated him into this traditional family-art at a very young age and over the last ten decades, he has been creating and refining Rajasthani folk painting traditions. Taking up contemporary stories and giving them new dimensions of identification within the phad tradition, he has developed his own distinct style using many different techniques. He is also credited with painting some original and meaningful compositions, including some wall paintings, besides phad. His wall paintings, including the one at the Crafts Museum in New Delhi, that won him the National Award, are made in the ancient fresco style. Elephants, horses, lions, and women with the pitchers on their heads are some of the recurring motifs in such work. His repertoire includes small-sized phad paintings based on episodes of Devnarayan Mahagatha, the battle of Haldighati, the jauhar (self-immolation) of Padmini and the episodes from the lives of Maharana Pratap and Prithvi Raj Chouhan, to name a few. Tukras, or small paintings, introduced by him are popular with Bhopas, the traditional phad singer-priests, though buyers of his work also include art connoisseurs, tourists, private and Government emporia and art galleries. His works are part of collections at the National Museum, Indira Gandhi National Centre for the Arts, National Crafts Museum and Sanskriti Museum in New Delhi, Linden Museum, Germany, Laforet Museum, Japan, Victoria and Albert Museum, London, Landesmuseum, Austria, the Smithsonian, Washington, Museum of Ethnography, Stockholm, as well as in Singapore, Netherlands and France. Winner of many national and international awards, including the Padma Shri and Shilpaguru, the Government of India’s recognition for Shrilal Joshi came in form of a special stamp for his famous creation Phad of Shri Devnarayan. The legendary artist, at the age of 75 years, continues to work with the same passion and guide his students in his workshop every day, striving for perfection and promotion of the traditional art form.