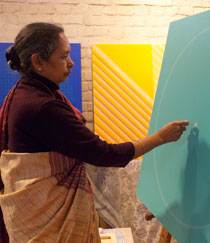 Shobha Broota, born in 1943 in Delhi, completed her Diploma in Fine Art from the Delhi College of Art, and also learnt singing, earning a Sangeet Visharad. Coming from a lineage of artists, Shobha has had a series of teaching assignments, including a stint at the Triveni Kala Sangam in Delhi, while she simultaneously continued to engage with her own creativity as an independent artist. Shobha’s work is soaked in a spiritual and meditative vision, reverberating with rhythms in oscillating patterns. Her seemingly simple and minimal work discourages interpretation and instead invites the eye to contemplate the form. Hailed for its philosophical depth, the work commands concentration on one’s part to comprehend and appreciate it fully. Her creativity entails using various mediums, including cloth, wool and iron mesh amongst others, and the experimental quality of her work takes it beyond the plane of mere abstraction. She works on canvas, paper and board with equal élan to make balanced and tranquil compositions in variable textures and palette. With an artistic career spanning more than four decades, Shobha’s work has been exhibited extensively in India and abroad including Delhi, Mumbai, Singapore, Chicago, Sydney, London, Hungary, Poland, Italy, as well as at the VIth Triennial India and Asian European Art Biennale at Turkey. A recipient of the AIFACS and Sahitya Kala Parishad awards, her work is held in important private and public collections in India and abroad.  Shobha lives and works in New Delhi. 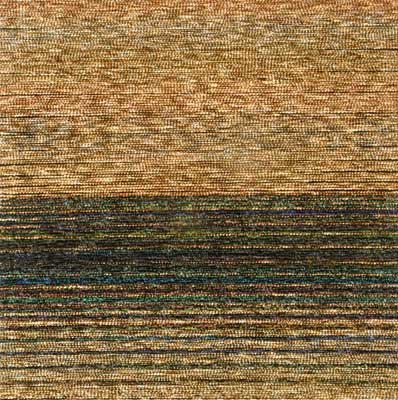 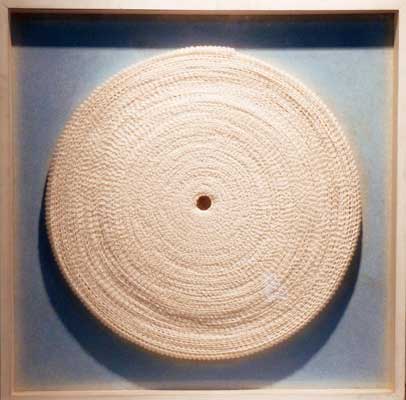