Born in 1979 at Kalahasti in Andhra Pradesh, Ramesh Gorjala learnt traditional Kalamkari art as a child and then trained formally, receiving his BFA and MFA degrees in Painting from JNTU, Hyderabad. Inspired by the arts and crafts of the region, particularly the Kalamkari paintings on textiles, walls and scrolls, which artisans of his village have been practicing for generations, his art incorporates iconic imagery in a fine assimilation of the folk and the contemporary. The densely drawn compositions, based on mythological tales and performing arts of the region, feature such characters from the epics as Hanuman, Krishna and others. Colouring them with his imagination, he shifts his signature-style onto another platform. The paintings, in acrylic on canvas and handmade paper, come in a blend of text and other markings, while his wooden sculptures of gods and dames convey a contemporary appeal. Recipient of the State Award from Andhra Pradesh Crafts Council and Mahatma Gandhi Birth Centenary Memorial Award, his work has been a part of many solo and group shows all over the country, including the Handicraft Show at Hyderabad and also in London. Gorjala lives in Tirupati and works from his studio there. 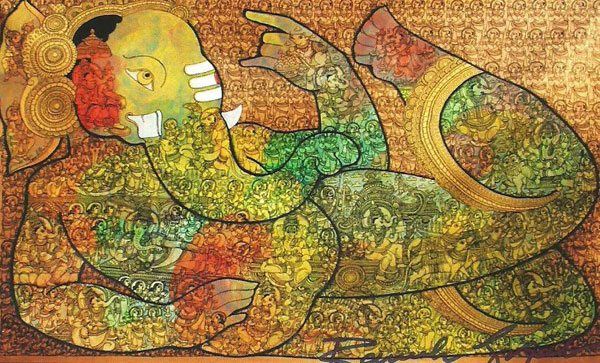