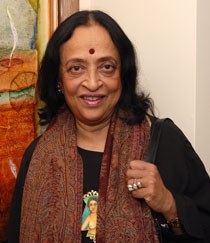 Born in 1940 in West Bengal, of mixed Bengali and American parentage, Anjolie Ela Menon holds a degree in English Literature from Delhi University. After a brief spell at Sir JJ School of Art in Bombay, she pursued postgraduate studies in Fresco Painting at the École Des Beaux-Arts in Paris on a French scholarship. Credited with a vast spectrum of work over the last forty years, her drawings, watercolours and paintings, mostly as oil on masonite, include brooding nudes, priests and prophets. Besides people, her compositions also feature goats, domestic interiors and windows while she has also painted on actual window panels and other objects. Keen on innovation, she has worked on murals, experimented with glasswork and sculpture besides computer aided images combined with photography, painting and collage. Her work has been exhibited in nearly fifty solo shows and many more group exhibitions held across India and in Washington, and London. She represented India at the Sao Paulo Biennale and Indian Triennial in New Delhi. In addition to private and corporate collections, her works have been acquired by museums in India and abroad. Her murals adorn public spaces including the T3 terminal at Delhi Airport. She has been honoured with Chevalier des Arts by the French Government, Padma Shree by the Government of India, and Lifetime Achievement Award by the Delhi Government. Three books, a portfolio by Lalit Kala Academy and several films have been made on her life and work. Currently Chairperson of the Acquisitions Committee of the NGMA, New Delhi, Anjolie is also a social activist who runs an NGO for the education of needy students. The artist lives and works in Delhi. 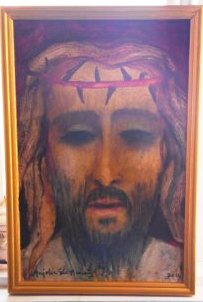