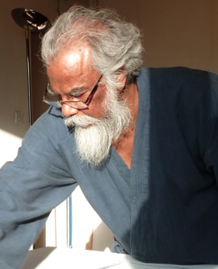 Born in 1939 in Kerala, Akkitam Narayanan secured a diploma in Painting from the Government School of Arts and Crafts in Madras, followed by a scholarship to study at the Ecole des Beaux-Arts in Paris, where he has continued to live for the last four decades. In geometric configuration of abstract and pure forms, he creates a fusion. Tantric forms in an oriental oeuvre are integrated within a European sensibility. Encompassing lines, angles, squares, rectangles, letters, and occasionally entangled, snake lookalikes, his imagery is suggestive of clouds, water, fire and other natural elements. His colourful forms, be it in paintings or etchings, appear akin to musical notations. He has won the Tamil Nadu State Lalit Kala Academy Award thrice and the IV International Festival of Painting Award at Cagnes-sur-Mer in France, amongst others. Narayanan’s work has been exhibited widely in India and internationally. It has also featured in albums and publications and can be seen in significant collections such as the National Gallery of Modern Art, New Delhi, museums and public collections at Chennai, Bangalore, and Ahmedabad, as well as in Germany and Paris. 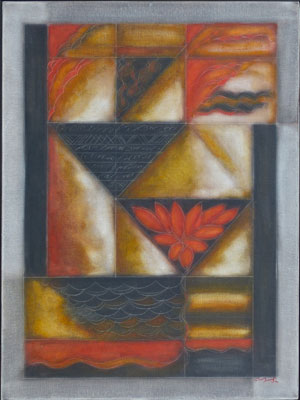